Five finalists vied for up to $75,000 as they presented pitches to a public television panel of industry experts at APT PitchFest Live 2019! event at American Public Television’s Fall Marketplace in Scottsdale, Arizona.

BOSTON (November 25, 2019) -- Five finalists vied for a prize of up to $75,000 as they presented pitches to a public television panel of industry experts at APT PitchFest Live 2019!, an event at APT Fall Marketplace held recently in Scottsdale, Arizona. A surprise ending occurred when two entries were selected, each winning a $75,000 prize!

The Grand Prize winners from Detroit Public Television are Lauren Smith, Executive Producer, National Projects, and Fred Nahhat, Senior Vice President of Production. Their entry, The Stress Solution with Dr. Rangan Chatterjee received $75,000 towards the completion of their project, based on receiving the highest points from the judges. Another of the five finalists, Amy Shumaker, Associate General Manager for Content at Fort Myers’ WGCU, and Les Stroud, survival expert and CEO of Les Stroud Productions, received high scores as well for Surviving Disasters with Les Stroud, resulting in an award of $75,000.

Last year, American Public Television (APT), the leading syndicator to U.S. public television stations, launched APT PitchFest, an initiative to find strong, innovative new content for public television viewers. APT had planned to award a Grand Prize of up to $75,000 in production funds to one winner at this year’s APT PitchFest Live 2019! With several highly successful pitches, the panelists elected to issue awards to two of the finalists.

“Public television stations across the country rely heavily on viewers’ memberships to provide financial support to ensure compelling content, unmatchable education television and strong community outreach,” said Cynthia Fenneman, APT president and CEO, and emcee of the APTPitchFest Live 2019! “Finding quality programming that will inspire local audiences to donate to the stations is a challenge. All five of the finalists in this year’s competition received high praise from our panel of judges thanks to their thoughtful connections to viewers’ interests.”

According to the panelists, Smith and Nahhat’s The Stress Solution was a winner largely due to the host of the show, including his strong knowledge, credentials, diversity and presence. The host, Dr. Rangan Chatterjee, is well-known in Europe as host of the BBC series Doctor in the House. Filmed before a live audience, The Stress Solution will feature Dr. Chatterjee focusing upon four steps to reset purpose, mind, body, and relationships, in an effort to help viewers build a personalized program to improve their health and wellness. His approach will include ways to become more active and live life fully, breaking away from the impersonal and strengthening friendships and interaction with others.

The panel of content executives at APT PitchFest Live 2019! judged the “pitches” on multiple points, including the quality of their content, chance of success, innovative aspect, and the execution of their pitch. In addition to winning $75,000 in production funds, both winners will receive assistance in bringing the content to fruition, anticipated distribution access to the U.S. public media market via APT, a free registration to APT Fall Marketplace 2020, and additional production benefits.

“We selected the pledge genre of programming again this year to reflect just how important the support of local viewers is to local public television stations. APT is committed to developing outstanding original content for television and online platforms, and our APT PitchFest is one of several initiatives to increase our compelling co-production and other content investments. In future years, APT PitchFest will broaden to include other genres of content for broadcast and digital first,” added Fenneman. APT is the nation's longest operating distributor of content to public television stations.

Full information, guidelines (including APT’s underwriting guidelines) for future competitions will be posted when ready at https://APTonline.org/PitchFest. 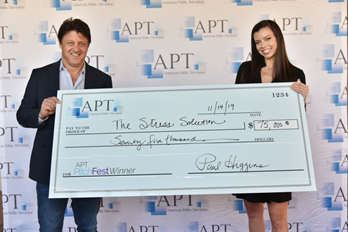 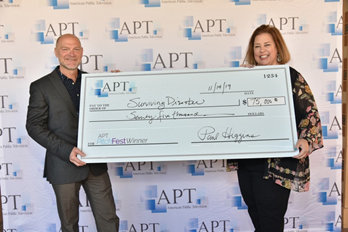