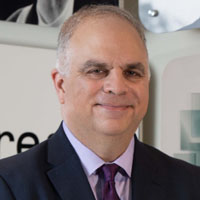 Dan Soles, Vice President of Syndication and Premium Service at American Public Television (APT), is a public television executive with more than 25 years of experience in programming and production.

As Vice President of the Syndication division, Soles seeks a broad range of quality programming from a variety of domestic and foreign sources, negotiates contract terms for broadcast, and coordinates program selection for the company’s annual program sales events. As Vice President of the Premium Service division, he oversees the identification, acquisition and distribution of fundraising programming for public television.

Before coming to APT, Dan was Vice President of Programming for The Programming Service for Public Television. Soles was on the Executive Management Team that provided programming support and strategy for over 40 public television stations across the country. Prior to that he was Senior Vice President at WTTW in Chicago. Soles joined WTTW in 1995, and was responsible for the acquisition and scheduling of all programming, the development and management of local and national productions and on-air fundraising for the station. He currently is on the board of Latino Public Broadcasting and has served as President of the Public Television Programmers Association.